While the weekend Kingfisher Derby was drawing to a close, anglers on the QCL fishing grounds yesterday could be forgiven for being more than a little distracted!  It truly had to be one of the most stellar days most of us have ever spent on the water.

The conditions were about perfect with just the slightest westerly ripple on the water and bright, broken sunny skies.  We’re absolutely flooded with feed right now, lots of needlefish near shore and tons of large herring boiling up throughout the grounds. Where there’s bait, there’s life and the water is full of it right now.  Humpback whales were having a hay day, scattered throughout the area feeding intently.  One group of 6 were cruising back and forth all day, just off Parker Point and Bird 2.  They’d go tails up and dive below a school of herring, some creating a net of rising bubbles around the feed.  Then, suddenly, the whole pod would erupt from the water with their mouths wide open to engulf tons of seriously panicked herring.  A totally awesome sight in the truest sense of the word. 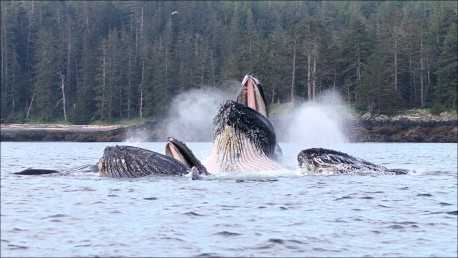 Then, after lunch, the Orcas came through.  We haven’t seen much of them recently but knew that they’d be around soon with so many salmon present.  They didn’t linger but there were several colourful reports of salmon stolen from the hooks of lodge guests.  At that stage most of us were releasing everything anyway so there were no hard feelings!  (As exciting as the experience is, this is something that anglers are asked to avoid.  Orca are very intelligent and will teach their young to associate fishing boats with an easy salmon meal.)

The derby itself was suspense-filled as always.  Newcomer Laurie Mackinnon set the bar on Saturday with a nice Tyee that taped out to 35 pounds while fishing with veteran QCL guide “Rainman” Dan at Cape Naden.  There were lots and lots of fish caught but few contenders. Some anglers made smart strategic moves entering “close” fish in the killed fish category or aiming for day money. 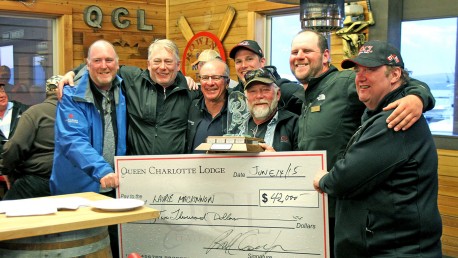 Fishing was fantastic all weekend with lots of action but feeders of 15-25 pounds dominate the population currently in the area.  We did see our first 50 pounder and there were other big non-derby fish but Tyees were tough to find. As the final minutes ticked away there was the usual flurry of calls for a Weighmaster, just in case this was the one, but in the end Laurie’s 35 pounder prevailed and he was crowned champion of our 13th annual derby.  Perennial derby participant Jim Roberts landed a 31 pounder on day 3 to claim second place, bumping Mark Fitzgerald’s 28.5, caught on Day 1 with Red Baron, to third place.  The largest killed salmon, at 26 pounds, was boated by Doug Martin with guide Luke Wagner on Day 3 as well.  Congratulations to all participants and thank you for helping to make the weekend such a marvelous success!