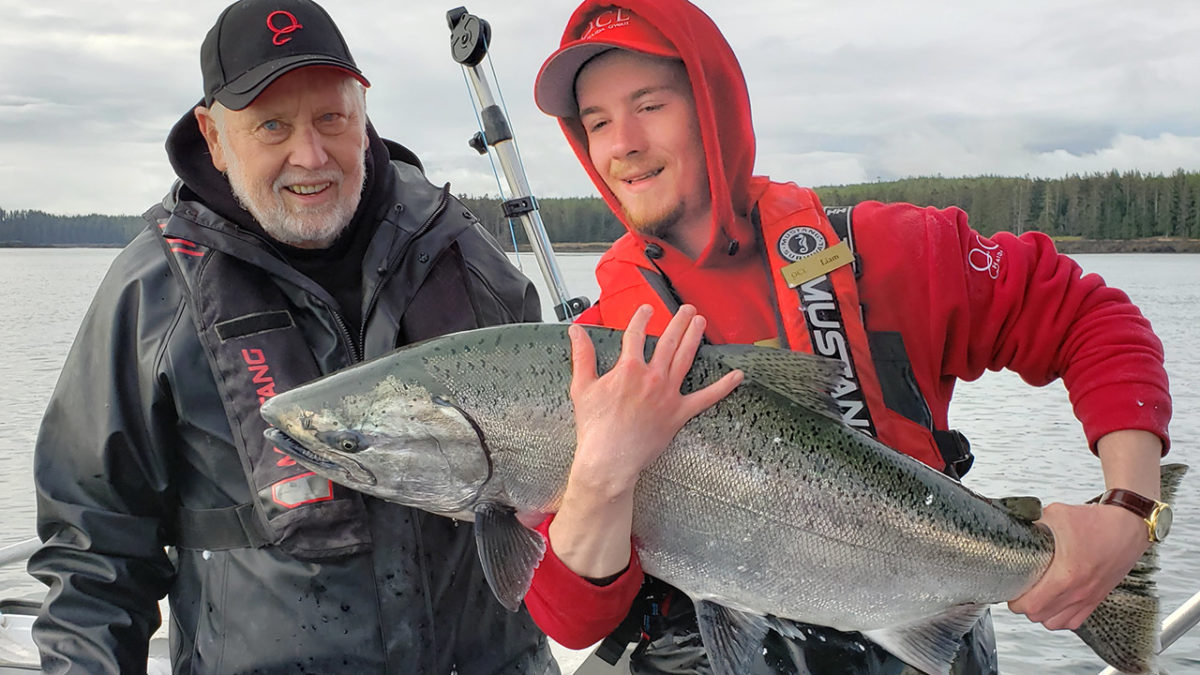 With the departure of our second group of guests this morning we’re feeling pretty darn good about the weeks ahead.  We’ve been treated to favourable weather and productive fishing.  The trend has been toward light northwesterly winds and as result our salmon fishery has been most productive inshore along the rocks and kelp beds –“where they should be”as our guides like to say!  All the favourite points are turning up salmon action, with a variety pack of sizes served up every day. Craig H and Sean C both hooked up with beautiful 30-pounders on Monday while Paul S boated a 33 on Tuesday. 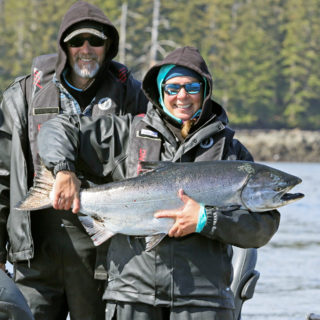 QCL guest Eugene Knuttila, staying aboard the Driftwood with his son Jeff, had the ultimate salmon experience while fishing off the bay at Yatze with QCL guide Liam Longacre.  On their second tack in glassy calm water Eugene’s rod dipped and he was soon onto a solid fish.  The battle lasted about 20 minutes with lots of jumps and some tug-o-war from the bottom.  But when the fish came to the boat and they saw that big head & shoulders, they knew this one was going back. After a quick measurement it was back in the water and only took Liam a few minutes to revive before it swam away with good strong strokes.  It taped out to 46 pounds and proved to be the fish of a lifetime for Eugene, who was thrilled to experience such a moment with his son. It was definitely a high point for Liam as well –great job guys!   Newlyweds Julia and Isaiah shared a similar experience when they tempted another big Chinook out of the kelp at Yatze, this one measuring out to 35 pounds before retreating to the shelter of the weeds after reviving.  Beautiful fishing everyone…  and Congratulations! 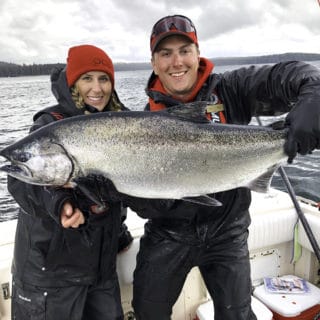 This week marked the first edition of the White Gold bottom fishing derby with prizes for largest halibut and lingcod. Tide swings of 16-plus feet made for challenging conditions but determined anglers prevailed and a number of good fish came to the scale.  A 37-pound lingcod took the top prize for John F while Eric H claimed the cash for halibut with a 33-pounder.  There were several big halibut caught and released this week – a 78 for Syd C, an 80 for Raymond P, a 100-pounder for Justin C and a 160 for John S – but the derby is for keeper fish only and that sweet spot between 50 and 60 pounds was elusive this week.  Good fun guys and we’ll maybe look for smaller tides for the next edition!

For this weekend light northwesterlies will prevail thru Saturday before we get a 10-hour dose of southeast that will steer us over to fish Cape Edenshaw on Sunday.  Tides are moderating nicely so we should see much easier bottom-fishing today and tomorrow. 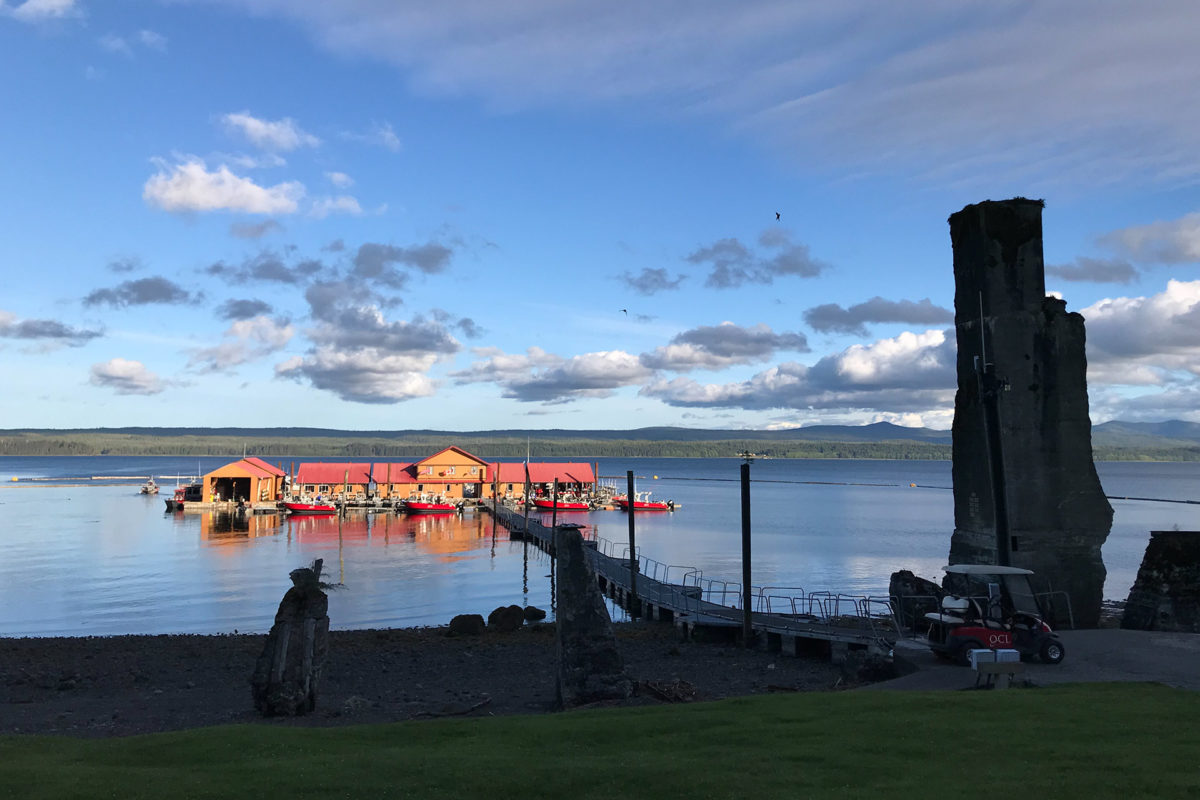 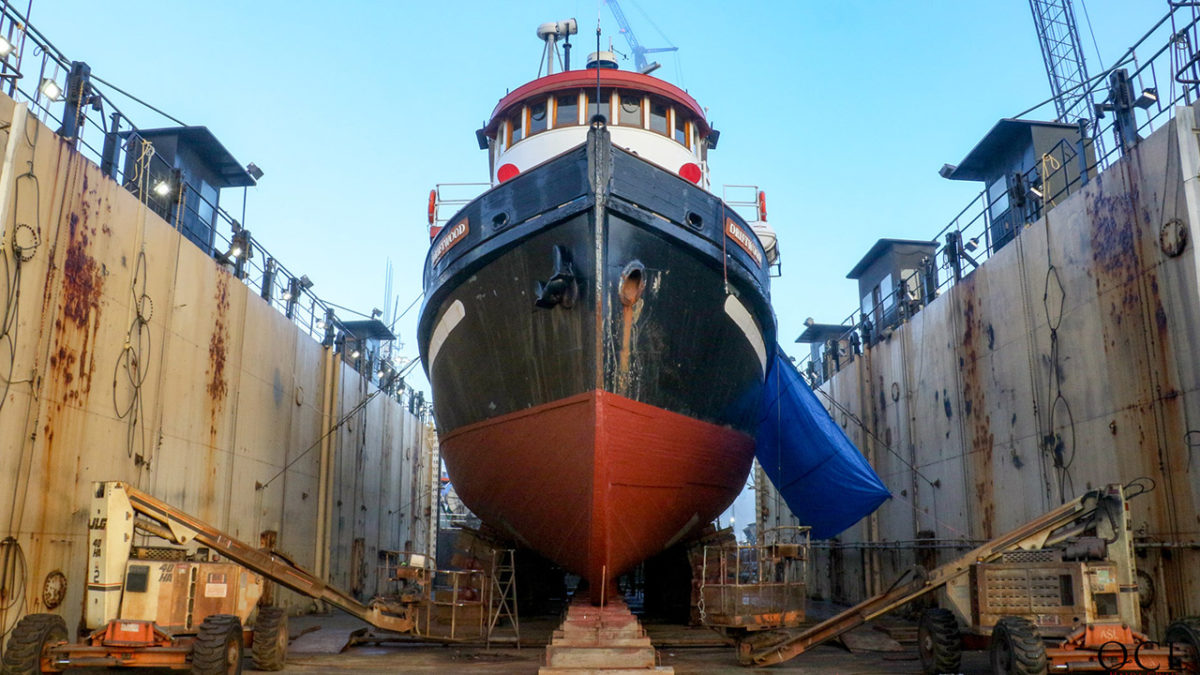 The MV Driftwood has been in drydock the past week for her quadrennial inspection. It’s always interesting to see what’s going on below the waterline!  We’re happy to report she looks mighty fine and will be ready to sail north to Haida Gwaii in May! 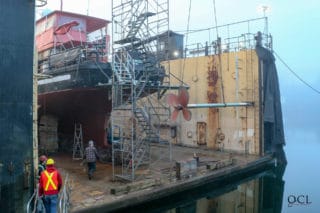 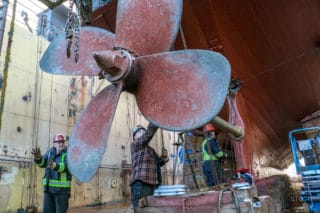 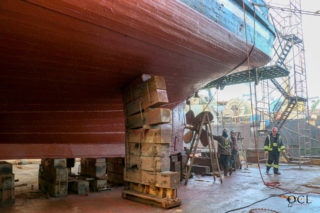 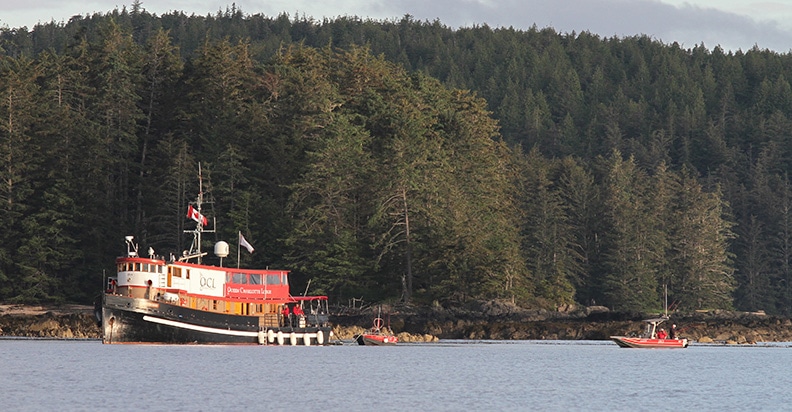 The MV Driftwood has just come out of dry dock after a 2-week stay at Allied Shipyards in North Vancouver.  Transport Canada requires that all passenger vessels come out of the water every 4 years for inspection.  The shipyard removes the rudder and stock, the propeller and tail shaft and all of the through-hull valves for service and inspection.  The shaft is checked on a lathe for true, the bearings are serviced and everything is cleaned and lubricated.  The hull itself gets a thorough examination by a shipwright to replace traditional oakum caulking between the planks. They service and replace protective gumwood cover boards and apply a special anti-fouling paint to the entire underwater hull to prevent growth of algae and barnacles.

Wooden vessels of this size are an increasingly rare sight on the coast and the Driftwood attracted a fair bit of attention while in dry dock.  Thankfully back in 1944 she was well built to Canadian Navy standards at Star Shipyards in New Westminster. The hull is sound and tight and is an impressive sight from below.  The hull above the waterline was scraped, filled, sanded and painted – a huge job that’s really only feasible during a haul out.

Photo gallery of the Driftwood in dry dock

With only 5 weeks until she sets sail for Haida Gwaii and another season at QCL, we’re sprucing up the interior and getting her all set up to host our guests on the fishing grounds.  Captain Ryan, Trevor, Sparky and crew are looking forward to welcoming you aboard!