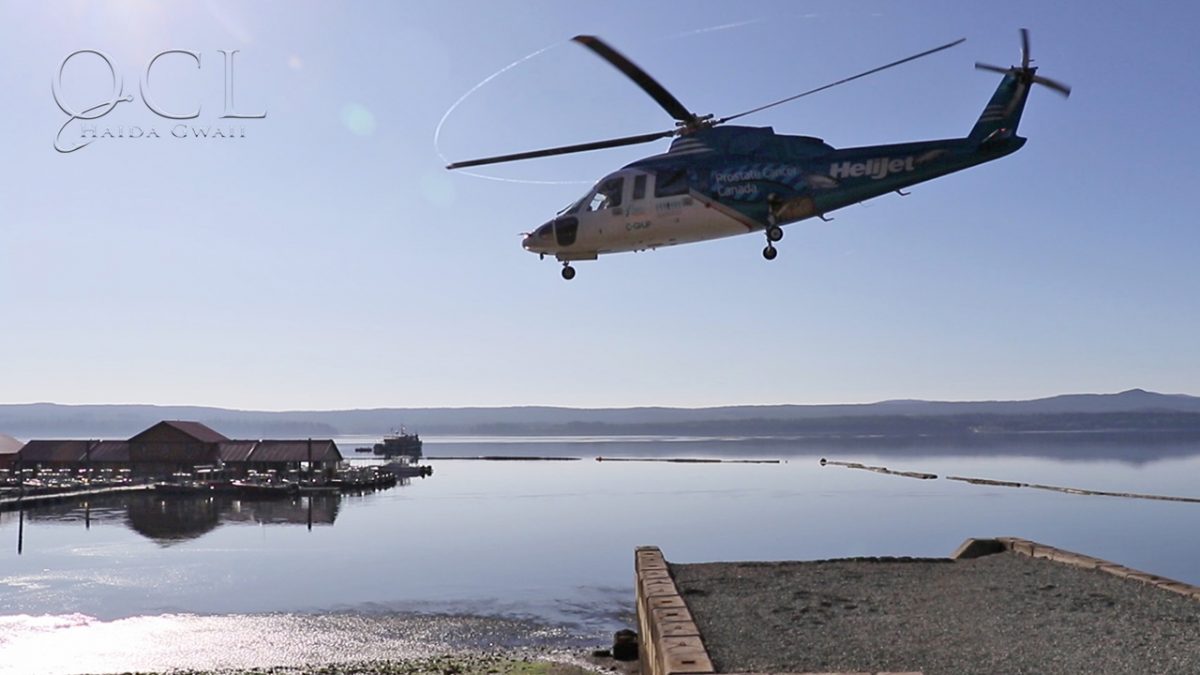 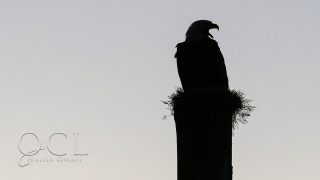 As the Sikorsky winds up and lifts off with our last guests of the summer, there is always a collective sigh of relief among the small group of us left standing at the helipad.  We share high-fives and hugs all ‘round.  Completion of the marathon that is the summer season at QCL is something worth celebrating.  I like to compare it to having company over for a visit… always a great time, lots of fun, delicious food and drink, wonderful stories and at the end, a little exhausting.  It’s a great feeling really.  The silence that remains after that last helicopter leaves is bittersweet. 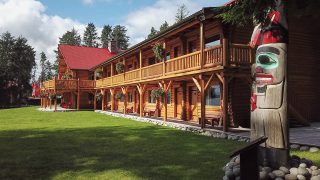 The latter days of the 2017 season were as consistent as the rest.  The bulk of salmon were found offshore with the commercial trollers in waters 250 to 400 feet deep.  Interestingly there was a huge mix of species out there.  As expected, there were tons of nice Coho in a wide range of sizes from 6 to 17 pounds.  There were far fewer Pink salmon in the latter weeks but we discovered quite a few Chum; with some chunky big silver ones up to 18 pounds, and we always seem to find the occasional Sockeye in the mix.  While we didn’t encounter any Tyees offshore, QCL anglers were successful at locating enough Chinook salmon to add a couple of them to most fish boxes.  They came in a range of sizes between 14 and 28 pounds and were generally caught at depths from 60 to 160 feet down. 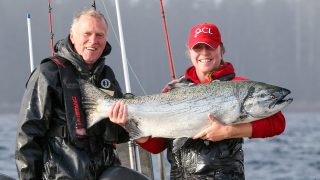 And there are always those anglers who wouldn’t give up on the traditional inshore fishery.  Right through to the closing day, patient anglers were still finding some nice Chinooks in along the rocks and the kelp.  Birds 1 and 2 kept a half dozen boats interested on most mornings and evenings with some nice Chinooks showing up every day.  The arrival of a big Chinook always gets a little more attention and the last 40-pounder of the season was no different.  Fishing from one of the Driftwood boats with QCL veteran Keith Burdett, Kristi Isaac hooked up with a good fish off the east corner of Bird 1 during the final week of the season. 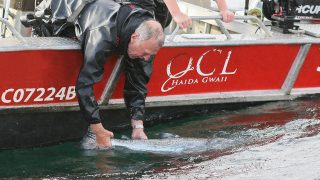 There was a decent chop coming with the northwesterly breeze and this fish was in no hurry to come to the boat.  But patience paid off and after 20 minutes a stunning big salmon was in the net.  We managed to get down there with the camera in time to document the occasion as Kristi had decided that this big Tyee should be released.  Taped out to 44-pounds and carefully revived & released, it was a fantastic way to cap off another great summer.  Congratulations to Kristi & Keith on a wonderful fish and thanks for giving it a chance to return to the river!

Now the process that we call “rigdown” is well underway.  Cleaning, counting, packing and shipping keep a good-sized crew busy for several days after that helicopter leaves.  The final stage involves disconnecting all the pieces of the marine operation and relocating the barges, floats, docks and breakwaters to safe anchorage for the winter.  Once that’s completed in late September we’re down to the caretaker team to spell each other off through to the new year when we prepare to start all over again! 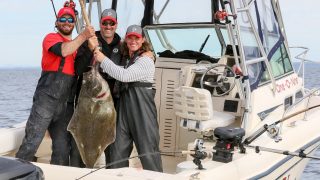 Season 27 will be complete.  It was certainly one of our biggest and busiest ever.  We knew there would be challenges with some of the new program changes this year and there were.  But, thanks to our incredible staff, a very dedicated management team and passionate and supportive ownership, we made it one of our most successful ever, on every level.  We’d like to say a huge Thank You to each and every one.  We couldn’t do it without you!  To our loyal and super-enthusiastic guests, we wish you all a wonderful Fall / Winter / Spring.  Enjoy all those delicious fish dinners and share them with your friends and family.  And remember, every time you pull a piece of fish out of the freezer, there is a story that comes with it!  Be sure to share those as well!