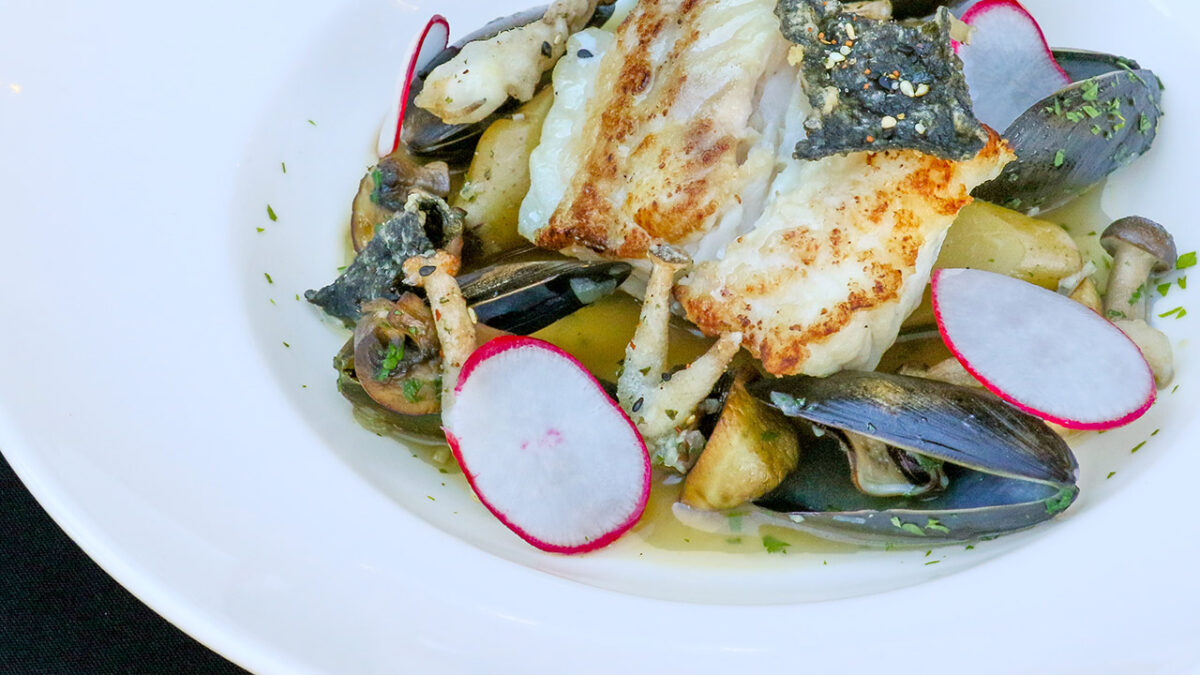 A challenging but very rewarding fishery here at Queen Charlotte Lodge is the search for lingcod near the underwater peaks and shelves that litter the ocean floor. Feeding on the flood, these aggressive predators snap at nearby bait and lures alike with their powerful jaws and gripping front teeth. Nothing prepares you for the first time you haul up a large ling-dinger and see the head emerge out of the dark depths as you crank away on your sturdy Avet saltwater reel!

Before coming to work at QCL in 2017, most of my saltwater fishing experience consisted of chasing around small lingcod with buzzbombs in the inshore waters of British Columbia’s Sunshine Coast region. From my dad, I learned to gut and clean my catch, and how to carefully separate the filets from the carcass. We’d cook the ling with lemon and butter, perhaps some parsley or tarragon if we were feeling adventurous.

Just as my lingcod fishing has evolved, so too has my culinary technique; in the kitchen today, we don’t just stop at lemon, butter and herbs for our lingcod dish. Inspired by similar latitudes on the other side of the North Pacific, the lingcod dish I chose to serve at QCL fuses local line-caught lingcod with Japanese ingredients and techniques for a dish packed with flavour and steeped with memories.

We start by making the tentsuyu broth, which is a slightly sweet Japanese broth commonly served with fried tempura items like tofu, vegetables or ebi. The broth starts with simmering shitake mushrooms, to which we add kombu (a dried kelp), mirin (sweet cooking wine), rice wine vinegar and tamari (gluten free soy sauce). Once these ingredients have begun to release their impressive flavours, we briefly add and steep some katsuobushi (dried and smoked bonito flakes). After ten minutes we remove the bonito and simmer the broth for another thirty minutes. The combination of kombu, katsuobushi, and mushrooms imparts an intense umami flavour. Umami is that meaty, savoury mushroomy-anchovy-raw tuna hard to quantify but “you know it when you taste it” taste.

Once our broth is prepared, the rest of the dish comes together quite quickly. Into a hot blue-steel pan we add a tablespoon of grapeseed oil, chosen for its neutral flavour and relatively high smoke point. Our lingcod filet is then slid into the hot pan, with the side first touching the pan intended to be our presentation side once all the cooking is complete. After a few minutes, gently flip the lingcod, and reduce the heat to the pan to just cook the fish through to medium-moist. You don’t want to overcook this lean white fish!

In another hot pan we start a brief sauté of sofrito (onions, garlic, and olive oil), into which we add a season mix of mushrooms, including chanterelles, baby king oyster, maitake (hen of the woods) and shimeji, as well as five Salt Spring Island mussels. After one minute, we add three halved fingerling potatoes which have been braised with some of the tentsuyu broth sous vide (under vacuum) in an immersion circulator. The potatoes are packed with that umami flavour and form the base for the plating of the dish. A short simmer with some vegetable stock under a lid to open the mussels and heat the potatoes through and we are ready to plate.

Into a wide bowl we evenly distribute the halved potatoes, forming a base upon which we can build some height and drama for the finished dish. Naturally allow the mushrooms to fall around the potatoes, settling into the bottom of the bowl. The mussels are placed around the potatoes, showcasing the delicious bite within each shell. On top of this umami platform, we place the just-cooked lingcod filet, crispy golden side up.

The final stage of the dish involves the garnishes, of which there are three. First, we do a quick pickle of thinly sliced radish, just a minute or so in a combination of rice wine vinegar, mirin and a touch of Maldon salt (a large-flaked English sea salt). As the radishes are absorbing the slightly sweet and acidic pickle, we quickly dip a cluster of enoki mushrooms and a few slices of wakame or yakinori (both types of seaweed packed with umami) in a loose tempura batter, and quickly fry them until crispy and golden brown. A quick toss in some house made furikake (a Japanese spice mix consisting of bonito flakes, seaweed, sesame seeds, sugar and salt) and our crispy nori and mushroom hay is ready to crown the piece of fish. The radishes are naturally set up against the other ingredients to showcase their colour contrast and provide some freshness, as well as some balance to the other flavours.

Once we have assembled the stacked potatoes, mussels, mushrooms, seared fish, and garnished with our pickles and crispy components, the last thing to do is to pour some piping hot tentsuyu broth into the bottom of the bowl. The heady aromas, intense layers of umami, seared and flaky white fish, lightly pickled radish, and fun and frivolous crispy tempura garnish are all essential parts to one of my favourite, and deeply personal, dishes on the QCL menu this year.