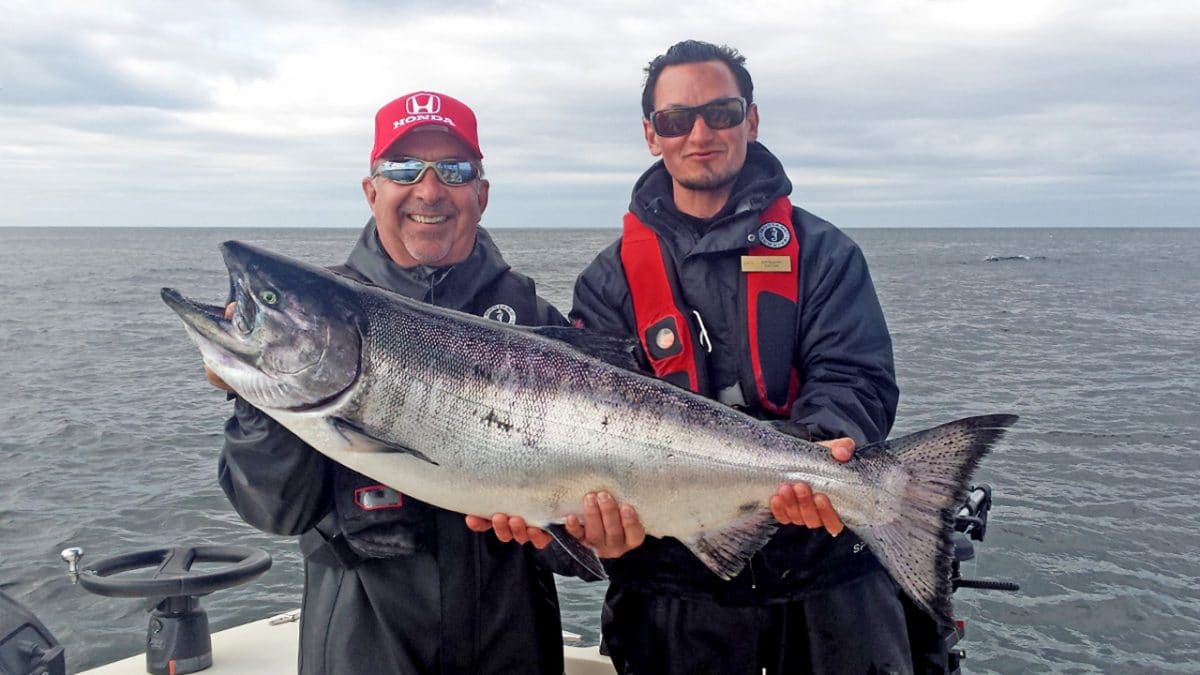 With the Kingfisher Derby wrapped up Sunday evening it’s back to business as usual for the guides at Queen Charlotte Lodge.  With that comes working just as hard at putting our guests on to fish as well as having great shared memories on the water with old and new friends. So really not much is different for us.

What my guests for the derby weekend and my new guests for this week’s trip have in common is that they’re all French Canadians, all residing close to Montreal.  Another similarity between two of them involve Tyee Chinook. Meeting my guests Monday morning for the first time I quickly found out that both Denis and Steve are from Quebec and that there would be a bit of a language gap for the three of us. Either way we had the same goal, to enjoy our time out on the water and make memories to last a lifetime. Fishing the grounds at QCL was going to break the language barrier and we were going to make it work.

Rounding the dolphin on changeover Monday, we headed straight to Cape Naden in Grady 114.  It’s just a twenty minute drive so we were able to get the lines in the water in short order. The afternoon still proved to be fairly tough fishing inshore as was the theme over the weekend, with a few Chinook averaging 10 to 15 lbs.  But with the evening tide change approaching the lure of hogs lurking in the depths kept us motivated to keep on grinding the kelp and structure. With an hour before low slack we were fishing tight to the kelp and rocks when the inside rod popped the clip and my Islander started screaming line. Denis C was up to bat and although never having fished for salmon before, he instinctively knew to carefully grab hold of the rod without touching the reel and let this big slab of a fish sizzle line. The battle was on and we knew we had a good one. Long runs and sounding on the bottom had this fish tiring itself out quickly. This Chinook was looking for a fight as it kept charging my boat like a bull, with us as the matador. Careful maneuvering of the boat had this “bull” in control.  The language barrier we had experienced throughout the day vanished as Denis and I now were on the same wavelength. He seemed to know what suggestion or tip I was going to give him next as he was already doing them. Nothing needed to be said because he was already doing exactly what I was guiding him to do. Twenty minutes later the Chinook was in the net, 33 lbs… not too bad for a first timer. Congrats Denis!  Looking forward to spending the rest of the week with you and Steve.

Just another day in the life of a guide. You never know what’s in the stack of cards you’re dealt. All part of why I love this “job”.

Keep your tip up, line tight and hang on for the ride.