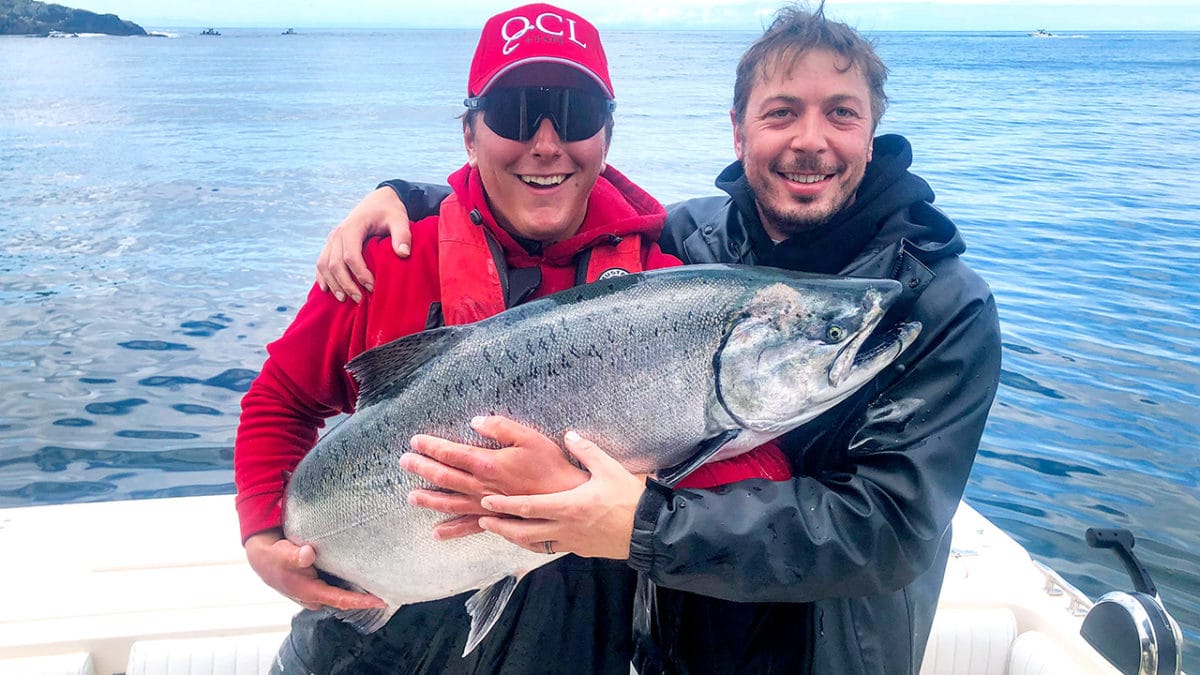 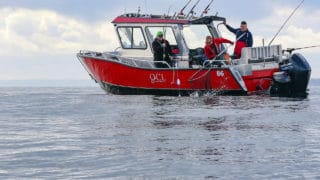 Well, as much as we enjoyed (what feels like a record) 8 days of light variable winds and flat, flat water, it’s nice to get a little back to “normal”.  Southerly winds flanked the islands on both east and western shores leaving a giant flat zone on our northern coast.  The fog and glassy water were interesting but we like a little wind to move the bait around and concentrate the salmon.  And that’s what happened this week as the inshore salmon fishing improved steadily every day.  There are some big Chinooks in the water these days and QCL anglers enjoyed tangling with quite a few of them!  ( In the photo above, angler Will K celebrates briefly with QCL guide Nic Rasovic before they release a gorgeous 43-pounder! )  Cape Naden, Bird One, Parker, B2 , Klash…every point has turned out some beautiful Tyee-class fish this week.  Along the kelp we’re finding them fairly shallow at 25-35 feet much of the time, especially on this week’s morning ebb tides.  Offshore the pinnacles are seeing a lot of traffic as big schools of Coho are making their way through the grounds.  Trolling deep between 70 & 120 feet we’re picking up those nice silver bullets, with enough 15-20 pound Chinooks mixed in to  really make things interesting!

Halibut action has been busy but there are so many “chickens” 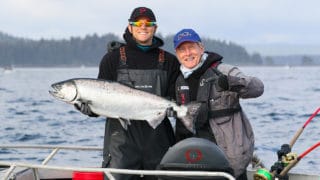 out there it’s taking some effort to weed through them to get those treasured 30-pounders! And of course, in the middle of all that, we find some giants.  Young Jarret C was jigging with his Dad and veteran QCL guide Derek Poitras when they hooked onto a monster that eventually taped out to just over 6-feet long, more than 200 pounds!  That makes quite an impression when you’re 12-years-old!  And for some anglers, winning a tug-o-war with a big ‘but is something of a fixation!  Such was the case for Roxy S this week.  For 17-years she’s been coming up to the Lodge and has certainly caught her share of big fish. 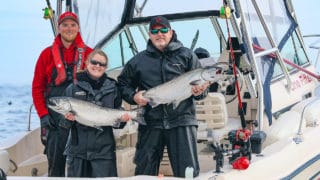 But the one prize that’s eluded her was the 100-pound halibut.  Well this was the week…on Monday, the eighth glassy calm day, Roxy coaxed her partner Cal out to the halibut grounds to give it another try.  She had to pull quite a few fish up from 200-plus feet but ultimately was rewarded with the one she was looking for.  With some help from the Fishmaster they taped the big fish out to 60-inches, scoring at 109 pounds, and Roxy had finally achieved her goal.  Congratulations Roxy!  That gold pin looks mighty fine on your shawl!