Halibut fishing has become more popular than ever at QCL and with good reason.  “Back in the day” most of our guests picked up a couple of random halibut while mooching for salmon and they were happy with that; not going offshore to jig for halibut meant more time for catching salmon!  With the introduction of GPS mapping of the fishing grounds many anglers have found their own favourite fishing holes and return to them year after year.  Releasing all of those big breeding females over 75-pounds has been a good thing too.  As a result, many QCL guests make fishing for halibut and lingcod a priority during their stay.

We know that there are some big fish out there; some really big fish.  It’s not unusual for us to see a number of halibut in excess of 100-pounds released every week.  And sometimes they are massive – over 6-feet in length.  Well last week, working with some largish tides, lodge guest Derek Benson and his father spent some time in a couple of boats with friends, fishing offshore in the hunt for a big halibut.  They tried out a few of our favourite waypoints but found their best luck over a hump 215 feet down.  There was a fair bit of excitement when they returned to the lodge and shared their many photos and videos of the results!

“We pulled up to our GPS mark at “Hali-wood”, knowing we were in a good spot from the sizable halibut lost there the day before.  Dropping back down to the same spot, my Dad hooks up.  Thirty minutes later we are cheering over the 254 lb. halibut lying alongside of the boat.  I had laid my 7-foot rod down to her and it was 6” short of the tip.  After a quick release, I reset on the GPS mark and dropped the same jig back down.  The fight started as I was adjusting the Lowrance sounder with one hand and jigging the rod with my other.  After 15 minutes of not raising the halibut up an inch, I asked my Dad to get the boat in gear and start circling around her.  My plan was to get momentum on the halibut to help angle her up, rather than trying to lift her straight up, with the boat in neutral.  An hour later (and 30 corkscrews later!) we gasp in disbelief at the width and length of this fish.  Again I laid my 7-foot rod on top of the fish, and there was still nearly a foot of fish extending past the rod!  It then took another 30 minutes to unhook it and 3 more times to the surface.  I was using my Shimano Teramar rod and Shimano Talica 16 2-speed, a tuna setup but multi-purpose.  Measuring out to 94 ½ inches it converted to 474 lb. on the IPHC chart.  This was definitely the fish of a lifetime, and I’m happy to say, it was safely released.”

Congratulations to Derek and his crew on a great angling achievement!  Two years ago we recorded a fish for Bruce Severson and George Best that measured out to 90 inches in length for a score of 405 pounds and we doubted that we would ever see another fish in that league.  This one certainly is and we’ll be happy to add Derek’s 474-pounder to the QCL record book!  We’ve seen a lot of great fish up here and we’re always in awe of the quality of our fishery!  Every time a new record is set, we’re happy to celebrate it! 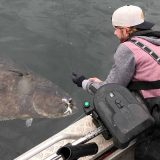 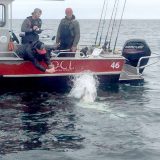 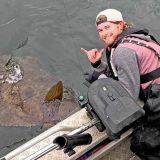 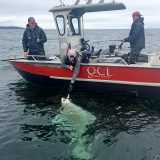 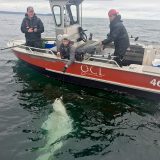