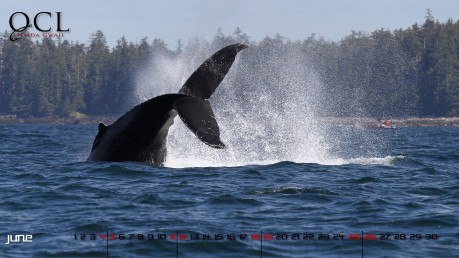 Here’s a set of calendar images all laid out to dress up your computer desktop for 2016!  Enjoy!

After South Westerly wind tore up the fishing grounds this past weekend, anglers were forced to hold off on fishing early Sunday morning. They stuck to the Eastern fishing grounds, Edenshaw, to avoid the rough waters that came along with the storm. This combined with a super pod of killer whales resulted in guests and guides having to work extra hard to fill their fish boxes, BUT all of our guests still went home with fish and had a great time!

Out on the water and back on the dock it was looking like our guests on Monday were also going to have a bit of a struggle to get their limits, but around  8:00 pm on Monday night Green Point lit up and the few guests the stuck out there to the end had an amazing night playing Chinook after Chinook.

The fleet hit the grounds on Tuesday and the bite was on! A new run of salmon hit and they were abundant! It was easily our most productive salmon day of the season and the Chinook were just the start of it. The Coho have finally hit and they came in strong. If the past couple of days are any indication of what is to come, guests will be going home with their 8 salmon! The average size of Coho was between 7-8 lbs, and one giant weighing in at 11 lbs! Chinook have maintained their size mostly in the 15-20 lb range, with a couple in the 30’s and the catch of the day on Tuesday a 47 lber!

During the month of May the number of Chinooks in the area have been increasing each day. You definitely want to be choosy and work to find larger fish. Tides seem to have little to do with the action; there are simply large numbers of great looking fish around that have only one thing on their mind – eating! Bait is everywhere and the the ocean is alive with whales, sea lions and seals in every direction. All of this coupled with flat seas and calm winds… we could not write a better script to start the season.

If you have been thinking about coming up for a visit this year you won’t want to wait. For those who have already secured their space, we are sure you are just counting down the days. As are we… 7 days until official season opening on June 7th!

There’s so much to look at while you’re here!

Some QCL creations to get your mouth watering…

Check out your choice of 5 excellent accommodations and the best dock operation on the coast!

Here are a few of the spectacular catches we’ve seen at QCL!

Here’s a collection of widescreen images that will grow steadily over the summer.

Not sure where we’re located? Find out the particulars here.