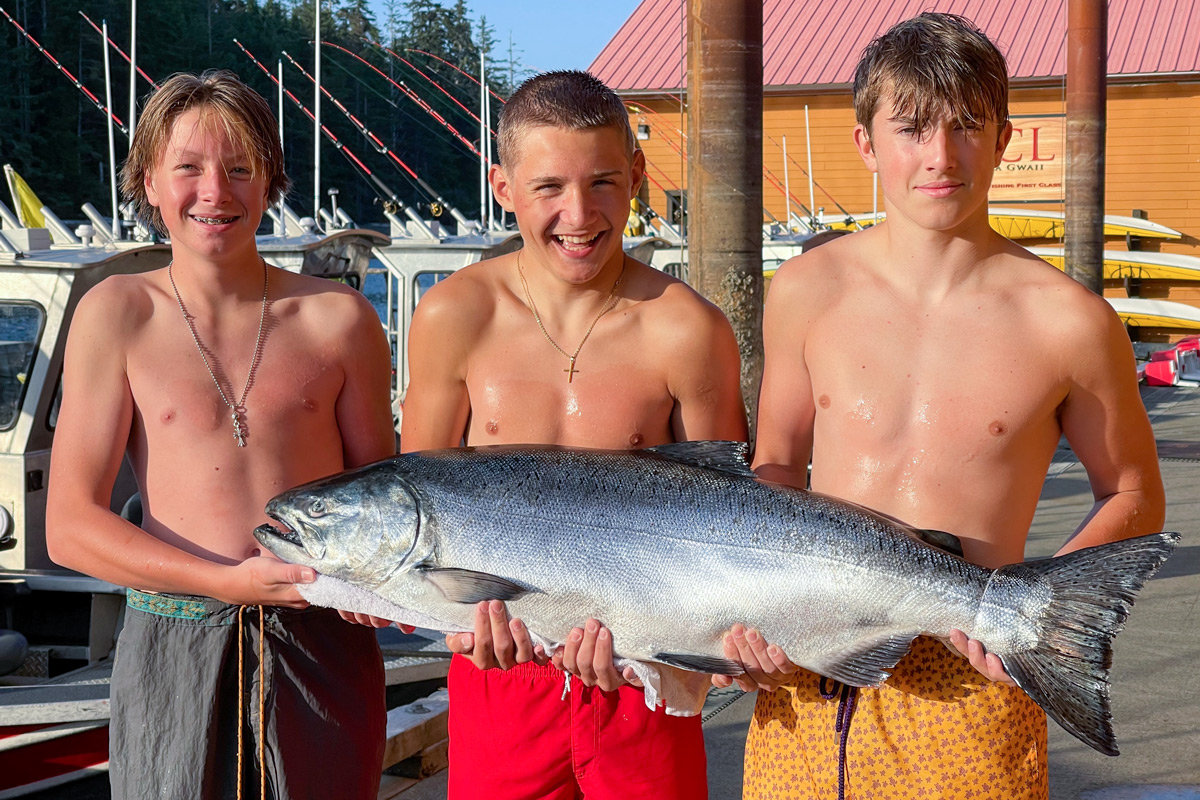 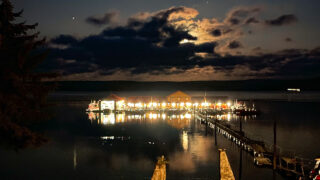 We’ve been treated to some stunning moonlit nights up here for a change!  You don’t realize how seldom you see the moon until it just appears one night.  We’ve sure enjoyed it, but the big tides that come along with a full moon have a more dramatic effect.

Late August salmon fishing is typically divided between hunting along the rocky shores and kelp beds for big Chinooks or exploring the offshore tidelines for schools of migrating Coho.  The Chinooks prefer the protective cover and like to feed during the slack periods around tide changes or they’ll often cruise the current seams and tidelines picking off baitfish getting pushed around by strong tidal flows.  Tide swings of up to 16 feet this week have definitely provided those conditions!  But our guides and guests have been quite successful at finding them – the Tyee Bell has been fairly noisy in celebration! 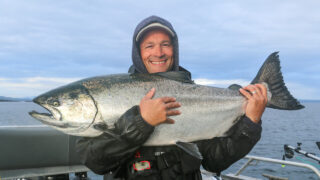 QCL guest Spencer A found a big beauty over at Slab Rock yesterday with guide Tristan O’Brian, who quickly taped the Tyee out to 43-pounds before releasing it to continue its journey to the river.  Tim G landed a similar prize off Bird Rock 1 which tipped the scale at an even 40.  Jeremy K released a 37-pounder at the Mazzaredos last week with guide Ryan Borschneck and Mike A boated a 35 with guide Colten Mochizuki off Parker Point.  Nico B didn’t make any mistakes battling his first big salmon on the weekend and celebrated at the Bell Ringer with his friends and guide Logan Allen, joining the QCL Tyee Club with a stunning 42-pound Chinook. 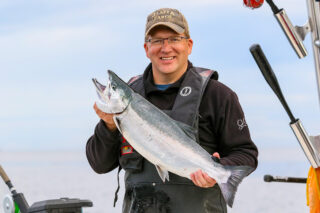 Offshore fishing has been no less productive, though the large number of Pink salmon passing through lately has certainly kept anglers out of their seats!  Coho have been found mainly out over the Pinnacles and on the halibut grounds.  We’re finally starting to see some of those larger, chrome bright Cohos that many of us get so excited about!  Bottom fishing times have to be carefully planned during these big tides and our guide team have that schedule very well dialed.  Most everyone manages to get their limit of halibut, and many are finding some of the larger “overs” in the 25-50 pound class, which is quite a thrill, and a serious workout! We haven’t been finding as many “barn doors” in the past couple of weeks but that will change next week when tide swings mellow to just 6 to 7 feet. 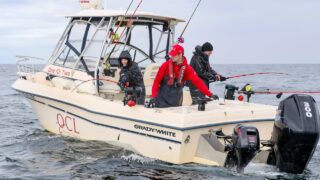 With September just around the corner, keep in mind that we’ve extended our 2021 season by 2 trips – adding a Monday-Friday trip – September 6-10 and a final weekend trip September 10-13.  There’s been so much demand this summer – everybody is loving the opportunity to escape and kick back up here at The Lodge!  If you can find a way, you should seriously consider jumping on one of these September trips – it’s absolutely the best way to finish the summer!