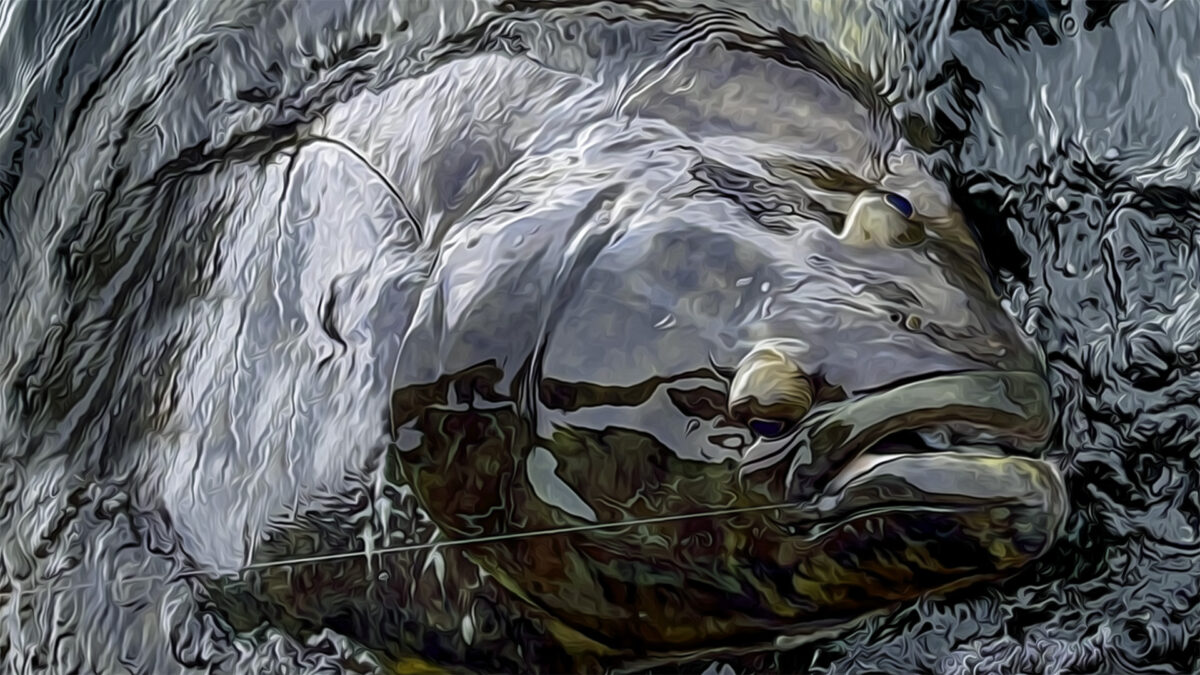 It’s fair to say that most anglers who travel to Haida Gwaii on a fishing trip dream of catching a big Chinook salmon, what we call a Tyee or, as our American friends like to say, “a big Kang”!  It’s easy to understand why.  In these cold northern waters, they are the kings, the royalty of the fish world!  Sleek and powerful and bright chrome silver, a large Chinook salmon over 30 pounds will certainly test the angler and their tackle.  And it’s never over until they’re lying in the bottom of the boat! 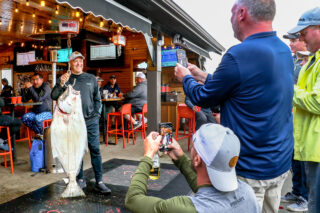 But if you ask these same anglers what fish they prefer on the dinner plate, the answer will often be halibut!  It might be the nice meaty texture, the brilliant whiteness when it’s cooked or the subtle, non-fishy flavour and aroma of fresh-cooked halibut that holds so much appeal.

In our early days when we used smaller boats and engines, we had no technology like depth sounders and GPS.  The halibut tackle was pretty light duty, and most anglers didn’t want to spend much time hunting for halibut.  In fact, many halibut were caught as bycatch while mooching with a weighted rod for salmon!   We’ve always been spoiled in Virago Sound, the halibut fishing is never too far from shore and anglers would make a quick run out to the “chicken coop” on the 180-foot line. They’d drop a herring down to the bottom and, in short order, they’d have their two fish limit – enough to keep a promise to their partner at home – and then it was back to working the kelp beds for that big Chinook.

But how the world has changed!  We used to use very rough triangulation to remember our halibut holes – line up that big old spruce snag with that point over there and stay even with that big rock on the beach, and you should be close to “the spot!” Well… maybe!

Nowadays we’ve planted so many X’s on the water that pretty well everyone has their own, favourite halibut hole!  Modern depth sounders synchronize with apps on your smartphone to actively upload depth and structure data to the cloud.  The detailed maps created of the seafloor have revealed a whole new underwater world, out beyond the kelp beds.  Sea mounts, pinnacles, rock piles and gravel benches provide habitats for all different species of fish and affect the tidal currents and feeding areas for baitfish.  What was, not long ago, a great, invisible, underwater mystery, is now a seascape for exploration and discovery.

We have lots of guests up here every trip who are quite happy to spend most of their time offshore doing just that.  We have larger, safer and more comfortable boats and tackle that can handle the proverbial “barn door” halibut.  We’re also able to find other species like lingcod and Pacific cod.  All of these fish are well managed and the limits are kept low to prevent overfishing of the stocks. And, of course, just because you know where they should be, doesn’t mean you’re going to catch them!  Afterall, it’s still called fishing… not catching! 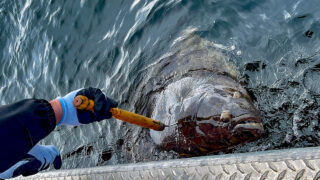 All that being said, here’s a good fish story…

On Saturday morning, Curtis, Jen and Colin were salmon fishing, self-guided, near the Mazzaredo Islands. This is a location, well inside Virago Sound, where the water depth ranges between 30 and 70 feet.  It’s been very productive salmon water for much of the summer, so they were trolling for Chinook salmon with cut-plug herring.  Curtis had just rigged a new herring and tossed it into the water to set up the downrigger.  As the herring started to sink, he noticed some movement below it and leaned over to have a better look… just in time to see the dark shadow open up to reveal a huge white mouth that inhaled his shiny herring!  The shadow moved alongside the boat and then back down, flipping a wide brown tail that had to be 18-inches across!  In shock, Curtis grabbed the rod from the holder and hung on.  The sounder said 32-feet, so the giant fish couldn’t sound too far!  But the hook was in its mouth and the 11-foot mooching rod was soon arched over in a half-circle with the line singing tight.  Typically, a battle with a halibut is a weight-lifting exercise, with a short, 6-foot pool cue of a rod that bends a little at the tip.  It’s often a straight lift with lots of give and take and usually happens in 200-300 feet of water, so there’s lots of lifting to do!  In such shallow water Curtis’s fish had nowhere to go but out, so he held on as best he could while his boat-mates stowed the downriggers and made ready to chase down this sea monster.  Fortunately for them, the tug-o-war was over in about 15-minutes as Curtis was able to maneuver the huge halibut alongside their boat; quite a feat considering the noodly salmon rod!  They used another salmon rod as a measuring stick and after several attempts concluded that this giant was about six and a half feet long – 79 inches in length!  It was in no mood to have anyone poking around in its mouth to retrieve the barbless bronze salmon hook so they cut the line after taking a few photos and the giant halibut disappeared as suddenly as it had arrived!  A look at the IPHC Halibut Chart revealed that this big female weighed about 265 pounds!  Considering where halibut usually live, Curtis’s opportunity to witness this giant take the bait was a rare occasion indeed.  While it’s not unusual for us to catch halibut, even big ones, in close to shore like this, we’ve never seen one this big actually brought to the boat.  Well done Curtis, Jen and Colin!  Surprises like this keep us all interested and excited to get out on the water any chance we can!