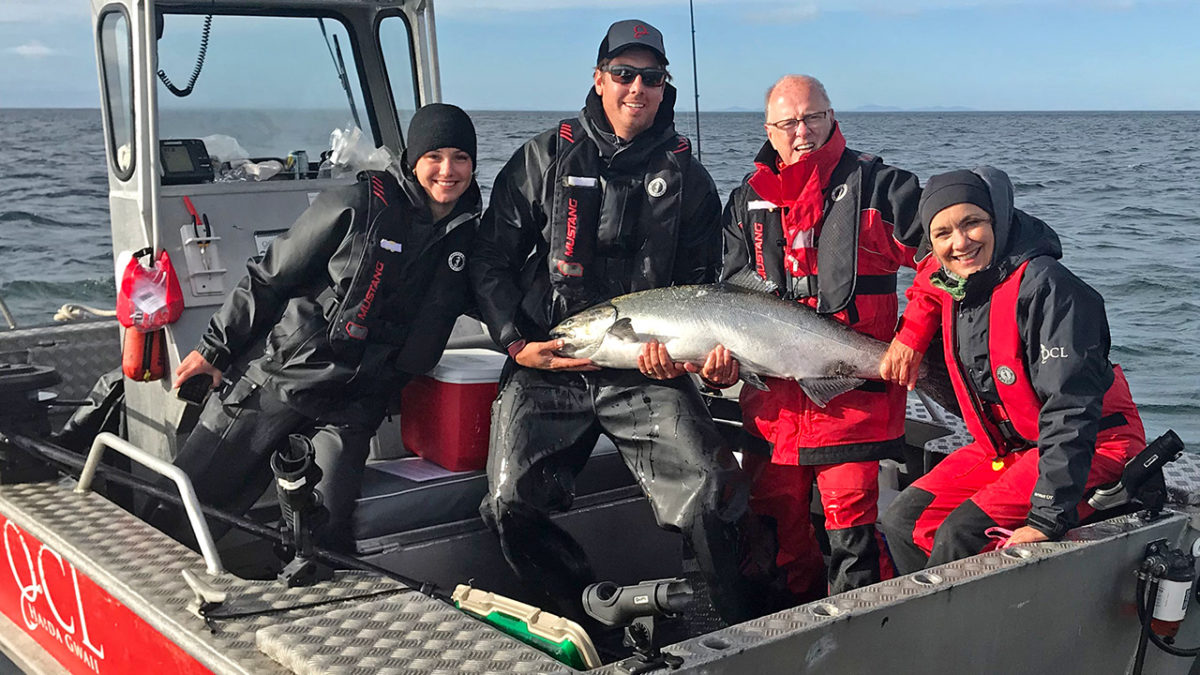 Last Saturday was one of those days when you talk yourself into going fishing. Breezy southeast conditions were predicted, the Driftwood was anchored at George Point and every boat would be trolling the shorelines around Cape Edenshaw. As the day wore on, boats would gradually make their exit and return to the lodge for some cocktails and a nice dinner. But often that’s when the determined angler utters those magic words…“Just one more pass”!

Working the kelp line inside Piggy Bay late in the afternoon, Tim & Karen D, hosting their newlywed daughter and son-in-law, lined up the perfect tack at the perfect time and the stars aligned. The inside rod dipped and Derek was there on the double. The telltale power of a heavy fish had the crew frantically clearing all the gear while Derek held on for quite a ride! Avoiding the safety of the kelp, this salmon was headed for open water.

Over the next 30 minutes they were gradually pulled about 500 metres offshore, away from the relative calm of the leeward shoreline. But patience and a deft touch on the gear eventually saw Tim ease the net beneath a big silver slab in the rock & roll seas. No blood and with lots of kick left in him, they chose to get a quick measurement and release this beautiful Tyee. Fishmaster Trevor Harris was alongside to witness the battle and take a few photos, then revive the big Chinook for a few minutes before it swam away with strong and steady strokes of its tail.

Congratulations were in order! Scoring out to 44 pounds, Derek and family released one of those legendary fish, the one that every angler wants to catch. Hopefully good fortune will see this salmon find it’s natal stream and it’ll spawn successfully. Certainly there will be lots of anglers 4 or 5 years from now who will thank Derek for giving it the chance!