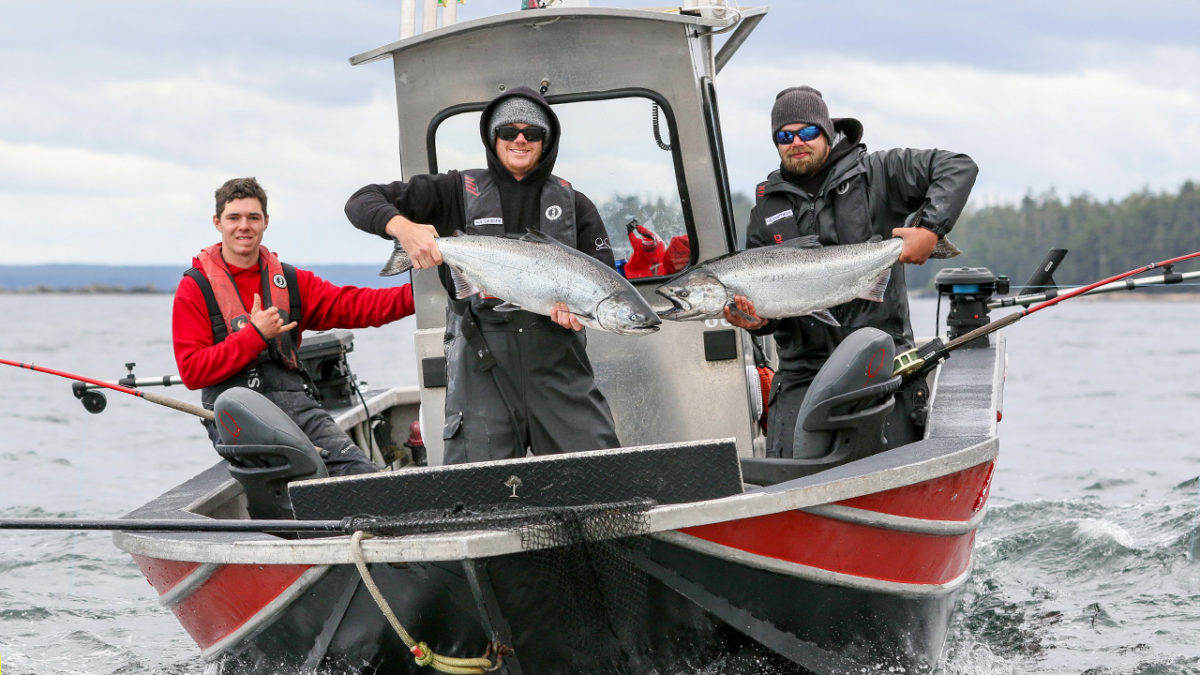 It’s salmon season!  Sure feels good!  A shift in the winds may have been just the ticket about two weeks back, when large amounts of bait started to appear in Virago Sound.  The food pyramid kicks into high gear and everybody gets to eat. 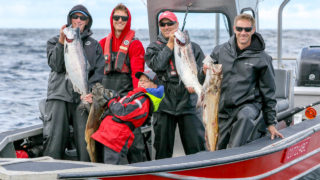 While we traditionally focus our salmon fishing efforts along the kelp beds and the rocks, we’re finding heavy traffic a bit offshore along the salmon highway!  In waters where we typically target lingcod and halibut, QCL anglers are trolling bait and finding steady action on several species of salmon.  Anchovies at 30-50 feet are productive on coho, chum and pink salmon while the Chinooks can be down a little deeper in the 70-100 foot zone.  And when you’re tired of trolling it’s so easy just to stop over a patch of structure down below and you’re into halibut and lingcod at depths of 150-250 feet. 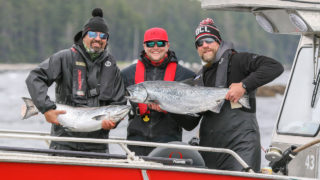 Offshore trolling is often productive but it’s not everybody’s favourite place to fish.  Thankfully the bays and rocks that we’re so familiar with – Cape Naden, Parker Point, Bird 2 and Klashwun Pt. to name a few –  are also holding bait and that’s where the lunkers prefer to hunt.  These prime spots are turning out some really nice fish lately for anglers with the patience and knowledge of the tides to find them at feeding time!  Herring, offered whole or in cut-plug form, is usually the bait of choice in here. 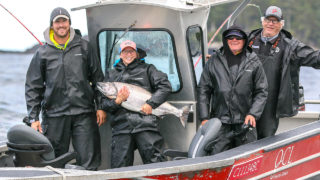 This past week the Tyee Bell has been getting a regular workout with new members joining the ranks every night.  Maxime G weighed a nice 35-pounder only to be joined an hour later when his father Luc rolled in with a 32 lb. Tyee of his own!  Most of the Tyee-class fish we’re seeing currently are in the low to mid-30’s but there have been some bigger fish around.  Roger G found a stunning 40-pounder at Bird One, fishing with QCL guide Aaron Lomax and Jason H released one last week.  The first 50-pounder of the season could certainly show up any day!

Northwesterly winds are forecast to continue this week and we’re hoping for a nice spell of sunshine – 2 or 3 days anyway – and that’ll put a smile on everyone’s face around here for sure!  Stay tuned!