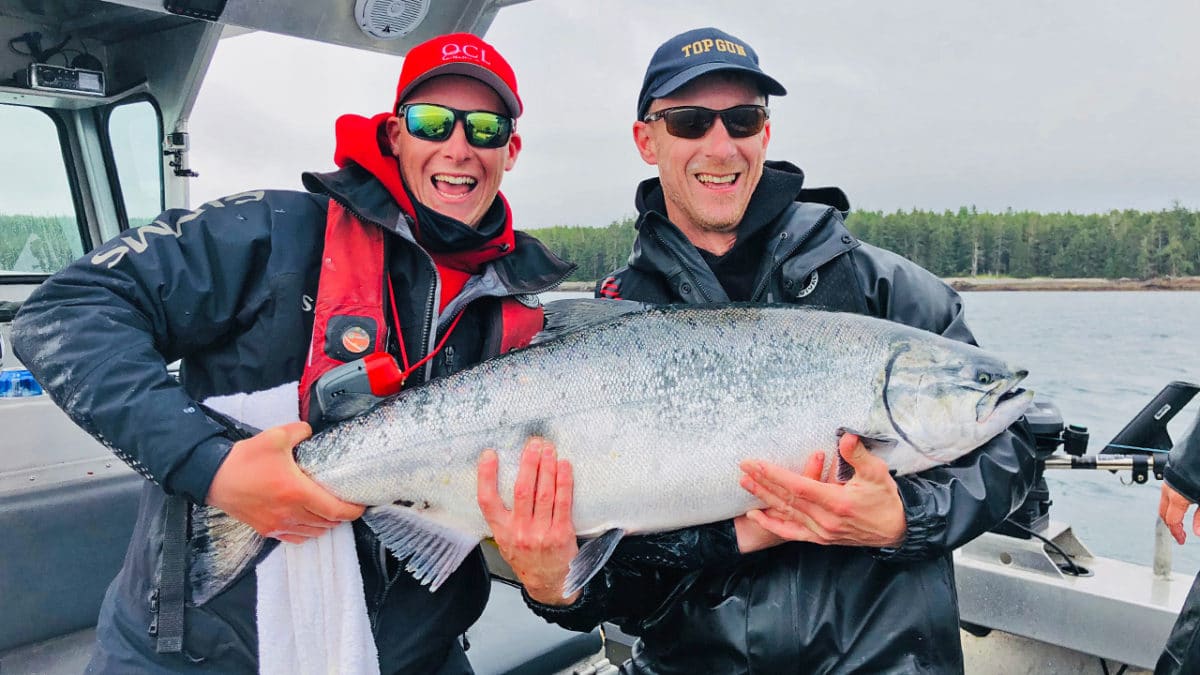 August fishing… oh boy!   It seems that everything really comes together by the time August rolls around.  Certainly the catch board would say so!  The inshore fishery, mainly focused on Chinooks, has turned out lots of beautiful big salmon every day.  Those brawny 20-something pounders are the backbone of the action but there always a few surprises lurking in the kelp!  The Tyee bell gets a workout every night with a couple big Chinooks caught and/or released.  Lately the median-sized Tyees have been in the low to mid 30’s with the occasional giant making an appearance.   Last week we were thrilled to see 3 of our largest salmon of the season caught – and released  – at 3 different locations.

Working a herring along the wall at Bird 2 has to be one of the most effective ways to find a Tyee anywhere on the west coast!  QCL guide Brett Towers was doing it right the other day, as the pressure was on!  He had his Dad on board with a couple of friends.  Making the turn along the kelp, deep in the bay, that herring worked its magic and Don was onto the fish of his dreams!  It took them on a bit of a hayride but in the end, Brett was able to get the net under it and lift it into the boat.  With a quick photo and a measurement, they had the silver giant back in the water.  Taped out to 47 pounds, it was the largest Chinook we’ve seen this season and cause for some serious celebration back at the Bell Ringer that night!  Fantastic work guys!  Well done Brett!

A couple of days later, Driftwood guest Stan T was over at Cape Edenshaw with his guide Mark Kasumovich when they also teased a big slab away from the shelter of the kelp.  Nice and vigourous when they got it in the net, Stan chose to send it back as well.  This one scored out to 45 pounds and was yet another proof of Edenshaw’s reputation for holding big fish under the right conditions.  Nice work guys and Congratulations to you Stan!   Not far away, on the very same day, Dave R was fishing Cape Naden on board 97 with guide Jackson Jane, when they connected with a big Tyee.  As Jackson reported in his post, it took the bait trolled on the back rod and gave them quite a workout before coming to the net.  David was quick to choose releasing this beauty and it swam off with strong strokes of its tail after measuring out to 46 pounds!  Amazing fish! 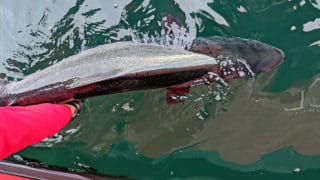 When these Chinooks aren’t bleeding and are properly revived, the survival rate is apparently very good.  So it’s quite an extraordinary feeling to watch a big Tyee swim out of your grip and return to the depths.  We have always believed that big fish breed big fish, and while we fully respect the angler’s right to choose, we try to ensure that they make an informed choice.  Many anglers dream of having that opportunity and we support anything that can help to ensure those opportunities continue in the future.